Woman Suffrage in a Western State

One of the strangers within New York's gates the first of the week was Dr. Henry A. Buchtel, Methodist preacher, chancellor of Denver University, and ex-governor of Colorado. Viola Austin of the Mail succeeded in getting speech with him. Women have had votes in all elections in Colorado since 1893, and Viola Austin's assignment was to ask the ex-governor what they're doing with them.

He didn't want to talk about the Colorado ladies and their votes. "It is a hateful subject to me," he said, "for once I make a statement regarding it, all the long-haired men and short-haired women will be up in arms to argue about it." He talked nevertheless. He told Viola Austin that he thinks her Colorado sisters take pleasure in the consciousness that they can vote if they want to, but as a rule they don't want to. "The mothers have to be practically clubbed to the polls," he said, as the Mail's reporter reports him. "My wife and daughter shun politics, as do the majority of the women in Colorado." Why, one young woman he know of wouldn't vote for the young man she was engaged to until her pastor talked her into doing it. To be sure, there are women of a certain class who vote as often as election day comes around. "It is this class of women that keeps the conservative, 'home' women away from the polls," said ex-Governor Buchtel.

The country has heard a good deal, first and last, of the women elected to the Colorado Legislature. The ex governor talked a little about them. "There have been few who did not demand the most absurd and unreasonable laws," he said. "The only trouble about the women legislators is that they will not listen to argument; no woman will. Logic does not appeal to them."

Viola Austin understood the ex-governor to say that he's a woman suffrage man himself in principle - which certainly looks queer. "But I do not think that the vote is good for them," he immediately continued, "nor they for politics."

Of course we shall now hear the usual shrill exclamations and contradictions. 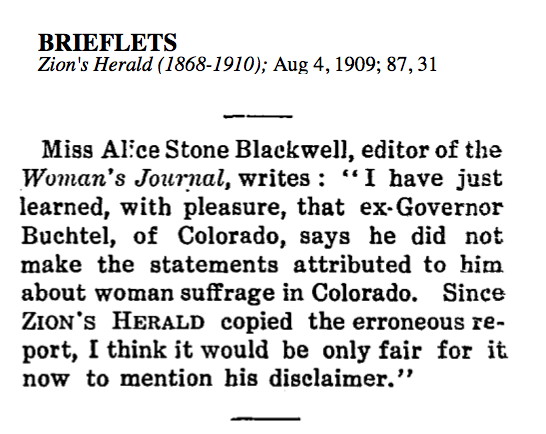 The clipping about the denial contains the following information: